View of the mill pond from the old vicarage 2011 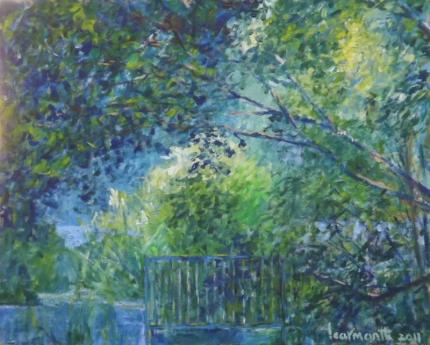 Title: View of the mill pond from the old vicarage 2011
Description: The fourth view of the mill pond taken from the old vicarage which is situated behind the north end of the pond. In this painting you can clearly see the strange bush and the railed outlet which leads down to the old mill off the left edge of the painting.
Size: 30x24
Format: Original artwork
Presentation: Framing not necessary
Medium: Acrylic
Genre: Impressionist
Colour: Blue, green
Keywords:
Delivery Details: UK free. Overseas Â£20
Price: £275.00
Status: For Sale
Contact Artist about offline payment, or to discuss a commission

Name: Gregory Paul Learmonth
Phone: 01943 864924
Website: www.greglearmonth.co.uk
Acceptable Payment Methods: Via Paypal or by cheque. Please note that all cheques must clear before the painting is sent or collected 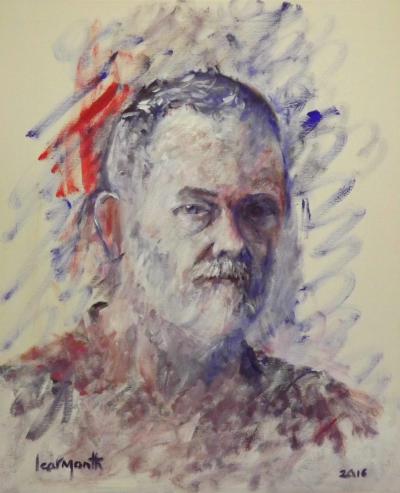 The first time I was called "The Monet Of Wharfedale" was after my impressionistic paintings were admired by a fellow villager 12 years ago and the name has stuck.

Ever since I was a child I have been able to draw and paint and I remember how good I felt when my classmates admired my drawings and how enthusiastic I was about art.

Then when I was fourteen I developed epilepsy and was put on strong medication which had a sort of dulling effect and the enthusiasm went. I was still able to draw and paint, but only did so during art lessons or, after I left school, as a means only of making some money during long periods of unemployment.

In 1997 I moved to West Yorkshire and after a few years, in March 2003, my doctor made an appointment for me to see a specialist. I reluctantly turned up at the appointment and after a short chat with the specialist he wrote me a prescription for a much milder type of medication and at a lower dosage.

In April 2003 after the old medication had washed out of my body and the new type had taken over I woke up one morning and an explosion went off in my head! It was like an epiphany and it felt like a veil had been lifted. I could see things a lot clearer and all I wanted to do was paint and study everything about Impressionism. I call it "the awakening". I gave up my job and took on a whole new way of life and even though I still suffer from epilepsy the dulling sensation has gone.

The passion and hunger are still alive today although a bit more under control! And that is basically how I started doing what I do. But this all happened when I was in my forties and I often think of all the time that was wasted, but I am also often told that it was fate that it happened when it did!

I regularly hold one man exhibitions in Burley in Wharfedale.I will let you know when my next exhibition is after thr current crisis has died down.
I paint on board and standard canvases unless otherwise stated or requested.
View Artist's Gallery/Portfolio View Artist Terms And Conditions